The chauvinist's in our society? 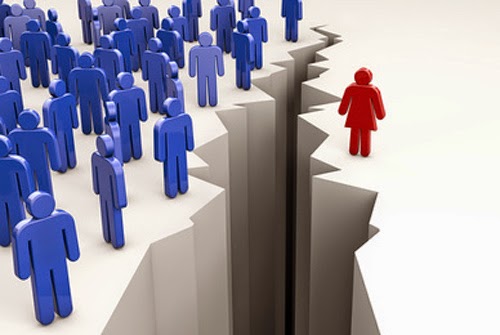 I can choose to conveniently make it a story and not worry about it or gossip about it, but I am sharing this real life incident to ask a few questions . May be make you think about how you should treat the fairly gendered or are women really fairly gendered?

Me and my friend were driving on a highway towards Bangalore, we were suddenly stopped by a few decent men showering concern as if they saved us from something terrible. We paused and so did the chaos inside the vehicle, we took our time to figure out what happened.

We saw all vehicles with men drivers were allowed to pass, there was this leader of the gang proudly stopping us and standing right in front of us, refusing to let us pass by, pointing his finger towards a tree which was going to be cut in sometime. May be an hour even more than that.

They had just begun to move the mammoth cutter, we told him to move and he refused... WHY?

They were protecting us, did they really? or they enjoyed having us as part of the crowd watching a macho man doing a macho task(Cutting a tree by our standards is not a worth mentioning deed). May be the men felt more manly as we were the captive women onlookers.

Our time was perceived to be of lesser value then that of other men who BTW were mostly the uneducated labour class men. Our status education and personality nothing mattered at that point and they right fully refused us a way just because we were the fair gender.

How pathetic is the system, and god knows how many more generations it will be before all get their equal space.

We felt odd by the looks we received from the men folks in the group and decided to teach them a lesson... we drove past them or should I say almost on them had they not moved aside just on time in great speed.

We had the courage and means to find our rightful way forcibly, but many would succumb giving these monsters more faith in themselves.

This incident is a small incident but to my sensitive mind it showed how deep is the chauvinist attitude.

Do we really need protection from all men irrespective of their stature. When will this change, equality is simply too much to seek, Why are women perceived to be totally incapable.Think twice before you rightfully choose to protect a women just because she is a women.

Any bodies gender merely is not a reason to perceive that they are weak and need your support, it is the situation.I believe in difficult time's all seek support men and women alike.

Seeking equality is such a taboo, even educated men stay vary of women who know their place and claim it.

“If you want to know what a man's like, take a good look at how he treats his inferiors, not his equals.”
― J.K. Rowling, Harry Potter and the Goblet of Fire

“I do not think, sir, you have any right to command me, merely because you are older than I, or because you have seen more of the world than I have; your claim to superiority depends on the use you have made of your time and experience.”
― Charlotte Brontë, Jane Eyre